R eproduction is a very natural process experienced by most of the couples but for some couples it is difficult for them to conceive and have the happiness of giving a life to a new born baby. 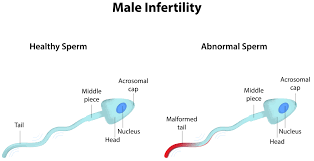 What happens in normal condition?

Man ejaculates their orgasm in the form of tiny cells referred to as sperm. During the intercourse, these male reproductive cells are ejaculated and transferred into the female’s body. Sperms and the sex hormones of the male called as testosterone are being made up in the testicles. The testicles is defined to be present in the scrotum, which is a sac made up of skin present below the penis. When the sperms are ejaculated from the testicles, they turn to be stored into the tube present behind the testicle called as epididymis.
Male fertility widely depends on the capability of the individual producing the normal sperms and then further delivering them. During the period of intercourse, these sperm present inside the epididymis get transferred into the females’ partner vagina. During this transfer from male’s body to the females body, the sperm travels from the cervix into the uterus of the female’s body to reach out to the fallopian tubes. Once the sperm and the egg present in the female’s fallopian tubes meet, the process of fertilization is commenced.

In particular, there are no signs by which you can figure out male infertility. This is all because, the  intercourse, erection of sperms, and their ejaculation occurs In a regular manner without facing any of the difficulties. The quantity, the look i.e. appearance of the sperms ejaculated in as usual when seen through the naked eye.

The problem can only be diagnosed by the medical test carried out in order to check if the male partner is fertile or not.

During the initial period of puberty, the growth and the formation of male reproductive organs is involved. It is mandatory to have your testicles to function properly and produce testosterone and other hormones for triggering the production of sperms. There is problem with the production of healthy sperms due to medicines intake, radiation damage, infections, undescended testes, or torsion i.e. twisting of the testes in the scrotum of the male partner or the genetic/chromosomal causes.
Once the sperms are produced in the testicles, delicate tubes of epididymis transports them to mix them up with the semen followed by their ejaculation out of the penis.
In case, when the no of sperms present inside the semen are insufficient, the chances of fertilization of the sperms with eggs is decreased.
If the sperms are not motile or the functioning is abnormal, there are chances that they may not reach the female’s egg in order to fertilize them.
Hormonal problems can include pituitary tumours, contigenital lack of LH/FSH, or the androgenic steroid issue.
The absence of the sperm antibodies can also be the cause of male infertility. This may be due to vasectomy, Injury or infection in the epididymis, or some of the other unknown causes.

The following tests listed below can be used to assess the male infertility as follows:

Semen Analysis test
This test can be used in order to determine the number and the quality of sperm. This test is a vital part for male infertility testing and for this home testing kits is also available in the market.
• Blood Test
Blood test is used to investigate about the existence of the infection or the hormonal problems. Hormonal levels plays a vital role in the male infertility similar to its role in females infertility.
Culturing of fluid
Culturing of fluid from the penis to check for infections
Physical examination
Physical examination of penis, scrotum , and prostate