The procedure of removal of the uterus is done once the results of all the IVF treatment are negative. 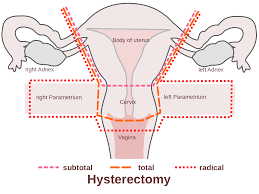 Hysterectomy is performed for the patient is they are facing the issue of uterine fibroids. There are other reason also for which it is conducted. Further, in response to the reason for undergoing the treatment, a surgeon decides whether the complete uterus is to be removed or removal of a part of the uterus will do. Different type of hysterectomy are performed and depending on the type of hysterectomy, the surgeon decides if complete uterus needs to be removed or just a part of it.

There are no specific problems associated with the patients who ever undergo the hysterectomy procedure. This is considered to be major surgery but as such there are no risks. Some of the complications are associated with it and they are as follows:

There are also some of the other risks associated with it which includes wound infections, blood clots, injury to the surrounding organs, and hemorrhage.

Get a free quote

After results of hysterectomy

After the hysterectomy, it is suggested for the females to avoid sexual contact and the lifting of heavy objects for near about six weeks after the procedure.

According to the survey conducted, results of the procedure are successful enough and are improving with the advancement in the techniques being used.